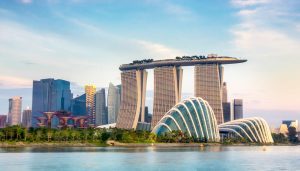 Though substantially small, Singapore is an economic giant. It has been Southeast Asia’s utmost modern city for over a period. The country comprises of the island of Singapore and 58 or so smaller islands.  Situated in the Indian Ocean off the southern tip of the Malay Peninsula, it has an area of 693 sq. km (268 sq. mi). Singapore is also a multiracial city, and approximately one-quarter of its populace are emigrants or foreign workers from across the globe.   Because of its well-organized, efficient and determined government, Singapore has developed as a flourishing country that outshines in trade and tourism and is a perfect model to developing nations. Singapore is both an island and a country, but perhaps its best description is that of city-state. Its amalgamation of Western-style development and Eastern-style tranquil seems to present the best of both hemispheres. Recognized for its yearning to become the technology hub of Asia, Singapore is the most wired country in the region.

While the entire continent of Asia is prefigured as a rising star in the world of international higher education, Singapore is outperforming the rest in launching itself as a force to be numbered

with thanks to persistent government initiatives focused on the importance of educational innovation not only in terms of acquiring superpower status, but also specifically and uniquely as it pertains to the country’s own economy. Ranked among the top 5 student cities in Asia, Singapore is all that an international student demands on the platter. A rapidly developing economy, Singapore offers a range of new age institutions which includes its own universities in addition to subsidiaries of international universities.

Singapore has an area of 693 sq. km (268 sq. mi).  It has been Southeast Asia’s most modern city for over a century. In the city, there is no need for a car. Public transportation is excellent and walking is a good way to explore the city. All major attractions are also accessible by tour bus. The world’s highest, standing 30 metres man-made waterfall,  is located at the Jurong Bird Park.  The National Museum of Singapore is the biggest and oldest museum with the youngest and most innovative soul.  Its combination of Western-style development and Eastern-style calm seems to present the best of both hemispheres: The Singapore Flyer rises to a height of 178 metres and offers a 360° panoramic view of Singapore, from the fast-changing Marina Bay that is transforming by the day, to the city skyline dominated by tall buildings. The Singapore FORMULA ONE race broke ground in 2008 as the first night race in FORMULA ONE history. With a challenging street circuit that runs around some of ’s most well-loved landmarks, fans can expect high-octane racing against a beguiling city skyline.

A lively city where people from many different cultures live together, Singapore makes a fascinating holiday destination. Situated almost on the equator, Singapore is a small yet beautiful island country, which is well-known for cleanliness and safety. Combining the skyscrapers and subways of a modern, affluent city with a medley of Chinese, Malay and Indian influences and a tropical climate, with tasty food, good shopping and a vibrant night-life scene, this Garden City makes a great stopover or springboard into the region.

Singapore is a lively, modern nation with an exceptional educational system, it provides countless opportunities and options for international students. It is especially popular amongst students who wish to study courses in animation, music, game development, design, etc. Most institutions in Singapore offer required support to international students so that they feel right at home. This is one of the main reasons why the Asian continent is considered as being a home away from home for all foreign students. Due to the well-built education system that promotes overall development of the students and affordable price of education for University level, Singapore has become the educational hub for international student.

Singapore has six national universities, out of which its two largest universities have more than 30,000 students each. Universities there also have a close network with top universities abroad, resulting in diverse universities in Singapore such as Duke-NUS, Lee Kong Chian School of Medicine (Imperial College London and Nanyang Technological University), Yale-NUS (Yale-National University of Singapore) and many others…

Work after study in Singapore

The average living expenses in Singapore could differ from individual to individual and depends on their standard of living. It could be anywhere from (SGD) $2,000 to $12,000, on a monthly basis, for both undergraduate and postgraduate students.

The cost of education differs depending on the level of study. Here is the average cost of study for an international student:

Breaking News New EE Draw Issues 5500 ITAs Again For the first time in the history of the Express Entry draws, IRCC did not proceed with its...